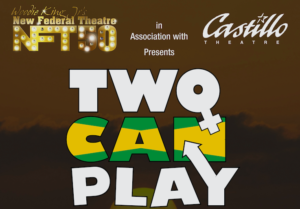 or choose a season subscription

TWO CAN PLAY by Trevor Rhone is directed by Clinton Turner Davis. Gloria and Jim, a lower middle-class couple in Jamaica, West Indies, try their wildest schemes to escape gun crime and establish residence in the United States. They survive because they learn to communicate and rediscover each other. Performed by Michael Rogers and Joyce Silvester.

Get Directions via Google

Castillo Theatre is a program of the All Stars Project, Inc.